I've just finished my map updates from the New Lanark Mapping Party this weekend. I'm pretty sure that this has been the best attended of our mapping parties with more new people than old, I didn't do a count but easily over 20.

New Lanark itself, is a World Heritage Site was originally founded in 1786 as Cotton Mills and Housing for the workers, it's an early example of planned urban development and the business itself was run with consideration for the well being of the workers and lead the way in reform, socialism and welfare. But the wikipedia article covers this, and is well worth a read.

The day started with a quick get together, where we choose our slices of the area to map, with Bob and Tim taking the new mappers around the village and because the mapping party was sponsored by The Central Scotland Green Network Community Fund  I picked a green area with other side of the Clyde, without quite realising how far it was to get to a bridge to cross….

This didn't matter as the the morning's rain cleared and the sun came out, the scenery was quite special. although parts of the area had been mapped in advance, there were lots of details to add: as well as the obligatory danger signs: and closed roads, which Dair - seen running out had already covered. In all we covered 11km of mostly footpaths, I was glad of the lack of tree cover at the moment which meant that I could vastly improve area's such as this windy downhill: 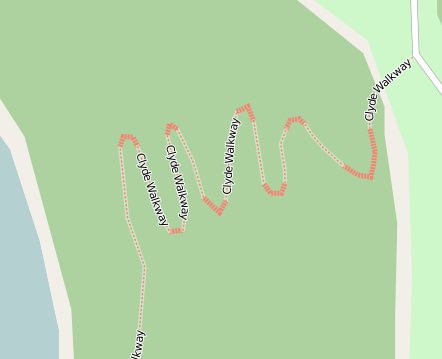 and some more urban mapping: By the time we got back, we had missed lunch but it was good to see everyone busy processing the afternoon's work: In all it was a great success, and a huge thanks go to Tim for doing the hard work of organising the day, sponsorship, venue and publicising the event. There is a mapping workshop in Glasgow on the 17 March and our next social meetup is on the 20th March in Edinburgh.

Have a look at the finished map..